For Canadian political junkies (and I know you’re out there), Andrew Heard at SFU is aggregating national and provincial polls into a running graphic, as he did during the last federal elections. 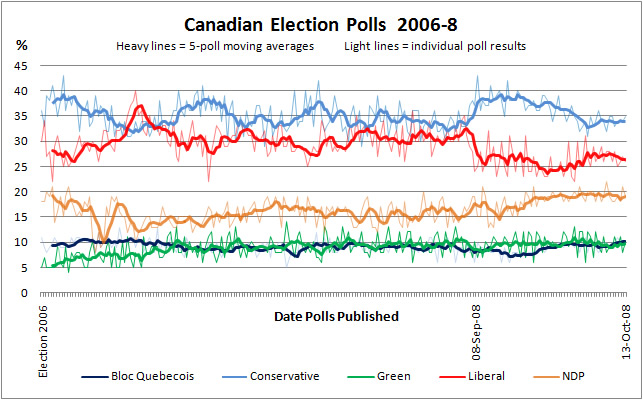 He also breaks it down by region and has good visual info regarding the sources of the data. All located here.

Probably even more useful that the data itself is the extensive gloss provided on interpretation of electoral polls. Executive precis: don’t trust them.

“A fundamental problem with media reporting on opinion polls is that there is usually little indication in the initial reports of how soft the reported support is for each party, or how each polling company tries to probe for voting intentions. Polls results often loosely proclaim “40% of decided voters… etc” However, that final figure may be based on having to prod the respondents at least twice into expressing a preference: 1) “If an election were held today which party would you vote for?” and, if they say don’t know, then they are asked 2) “which party are you leaning towards voting for?” The second group are only leaning and should not be viewed as actual support, and yet most polling companies roll the leaners in with the truly decided.”

Regards for this wondrous post, I am glad I detected this web site on yahoo.

Respect for ones parents is the highest duty of civil life.