Paradise Drowned: Climate Change Impacts and Adaptations in the Caribbean 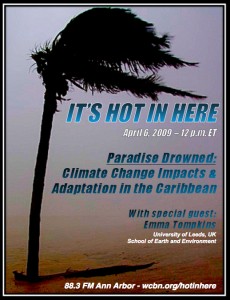 Today we take a journey through the Caribbean as we discuss how the region is responding to both long-term and immediate climatic hazards.

Joining us in the studio is Dr. Emma Tompkins, University of Leeds, School of Earth and Environment. She is a prolific author and much research that looks at current societal responses to natural disasters in order to anticipate climate change adaptation. Some of her other interests include: sustainable adaptation to climate change; climate change decision making; scales of governance in enabling and constraining climate change responses; identifying the psychological, social and cultural and economic limits to adaptation.

Ice bridge ruptures in Antarctica, adding to fears that it’s worse than scientists had thought.

Climate is the loser at the G20 meeting, but optimism abound for transforming lemons into a 100% natural and fresh squeezed lemon drink through a so-called “green New Deal.” It’s creative destruction.

Takin’ it to the streets: Coal protests in Bay City, MI.

Small islands are livid, and you would be too if your home was slowly drowning.  The Alliance of Small Island States pleads for action from the world.

Algae sucks.  Trophic cascade due to human overfishing and climate pressures has led to the collapse of our pristine Caribbean reefs.  First the sea urchins reigned, but even they couldn’t compete with the tenacious resiliency of brown algae.  See more detail from the Resilience Alliance.

A digital tour through the bins of long forgotten Caribbean grooves, including Mighty Sparrow, the Professionals, Grupo Ikare…

May I reccommend this fine series of compilations from Numero Group? – pure solid gold jams (and the source of 4 of today’s songs)!