Playlist Datamining 2: Doing it All in Google Refine

Last week I wrote about using Python, Google Refine and PostgreSQL to datamine my old radio playlists. That was fun.

Almost as soon as that post went up a commenter appeared to suggest that I wasn’t making full use of Google Refine‘s powers. Yes it can do data cleaning, but (they suggested) it can also do some of the data-to-knowledge transformation that I had jumped over to SQL for. I resisted that, and @MagdMartin, propietor of the Google refine basic blog, arrived and offered to prove it.

Prove it he did:

The full results can be had at the above link, include screen shots demonstrating the steps he took to reproduce my music charts without ever leaving Refine. E.g.: 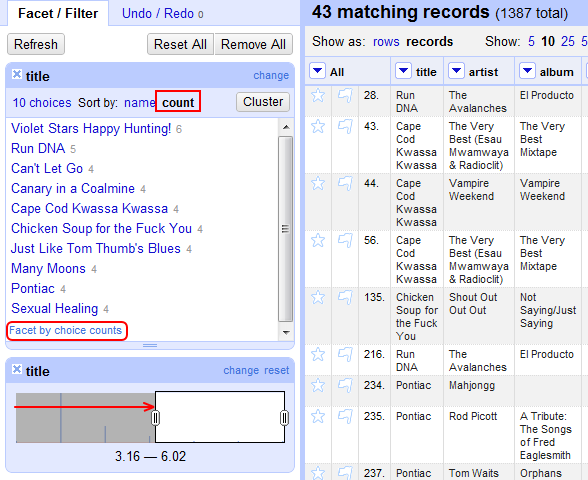 Notice the Facet by choice counts button highlighted in red. I didn’t. It seems to be important.

He also started to look at distribution of albums among episodes, which isn’t something I got into. And made the point that I managed to play one Kleptones track twice in a single episode. I haven’t forgotten that incident, but thanks for the reminder.

I’m not likely to abandon PostgreSQL and SQL-based data mining completely in favour of Refine. Refine is of course not intended as a relational database manager, whereas Postgres can work it’s magic across many linked tables simultaneously. Even for working with a single spreadsheet it’s unlikely that Google Refine (or any GUI-based data mining application) will be able to match the utter data-mashing flexibility offered by SQL. Once you get good at composing SQL queries it can also save a bunch of time, particularly if you’re doing the same kind of querying repeatedly on multiple datasets or multiples facets of a given dataset. Tweaking a word or two in a SQL sentence and pasting it back into the console window is faster than re-clicking a bunch of buttons in the proper order.

On the other hand, there are real advantages to the all-Refine method proven above. Refine is relatively easy to install on your computer and import data into. PostgreSQL is a pain in the ass on both counts. Clicking buttons is intuitive. This is probably the only sentence on the internet containing the words SQL and intuitive. I can imagine some of my friends in journalism and the social sciences becoming very productive with Google Refine’s cleaning and manipulation methods (and they should!). PostgreSQL is probably a bridge too far for most people who don’t spend most of their lives up to their elbows in teh data.

Thanks MagdMartin for demo-ing the possibilities!