Science holds a suspicious bias against publishing negative results. Negative data is still data, if it is unequivocally so. If someone undertakes to demonstrate a relationship which we would expect, based on existing theory, to exist, and that relationship cannot be found, then that person has made a significant contribution to our understanding. If you in your work as a research scientist have ever been startled to discover such a missing relationship, then you probably didn’t publish or couldn’t publish on that result. Perhaps some other scientist is even now repeating your experiment, because you were unable to reach them with this information through the typical approach of academic publishing. When they get their results, they probably won’t publish either.

This is macho nonsense, and looks like a serious hole in the fuselage of the scientific enterprise.

I sometimes complain that I’d like to found a “Journal of Negative Results” to counter this bias. It turns out one already exists (hooray!):

They’ve been publishing studies which “test novel or established hypotheses/theories that yield negative or dissenting results” since 2004. Albeit sparsely. From the first volume, Temperature and desiccation do not affect aggregation behaviour in high shore littorinids in north-east England, is just the kind of study we need to see.

Even more exciting is that there is also a real, very serious, not-just-to-make-a-point,

Journal of Negative Results in Biomedicine

which has been been publishing peer-reviewed work since 2002. For example, one of the most-accessed articles from the journal is Quantitative competitive reverse transcription polymerase chain reaction is not a useful method for quantification of CD4 and CD8 cell status during HIV infection.

Next step: get the JoNegRes for Ecology and Environmental Biology up to full steam. I need that information.

Thom King is Running for MP in Guelph

Fun. I know nothing about the race, except for this tidbit from voteforenivronment.ca:

This is a riding where vote-splitting could easily elect a Conservative this time but it is very tricky to call. Liberal incumbent Brenda Chamberlain is not running again and the NDP candidate is high-profile Aboriginal broadcaster and writer Tom King. The Green party with candidate Mike Nagy has also shown strongly. Based on past results, it looks like the Liberal candidate has the only chance of winning however please check back close to election day for up-to-date information.

After getting irritated at humankind’s inability to accept that some things are genuinely uncertain, I open my podcasting device and hey presto:

Resilience: Adaptation and Transformation in Turbulent Times — A World Of Possibilities, May 6th

It opens with Buzz Holling (who NRE 580 alumnus will remember for panarchy theory) on adaptation, uncertainy, adeterminism, non-equilibrium, and such like in the general world. Then it moves onto Brian Walker talking about much of the same in ecosystem management, plus control fetishism. Then it moves on from there. Recorded at a Stockhlom conference on applying biology-based resilience theory to social systems. The idea of which is now creeping me out. Except that maybe, just maybe, this is a group of people that can be trusted to think rationally across disciplines. Maybe. Anyhow, it’s good listening.

Brian Walker’s talk reminded me of a lecture on conservation management from my undergrad, wherein Thom Nudds announced that if you manage to get an ecosystem to not cycle you’ve flatlined it, so congratulations on that.

Wordle is a brilliantly flexible applet for creating text clouds. It has suddenly become very important for me to wear one of my papers as a tshirt. Or perhaps to write a paper worth wearing as a tshirt.

Here is Historical context for endogenous theories of ecological diversity: 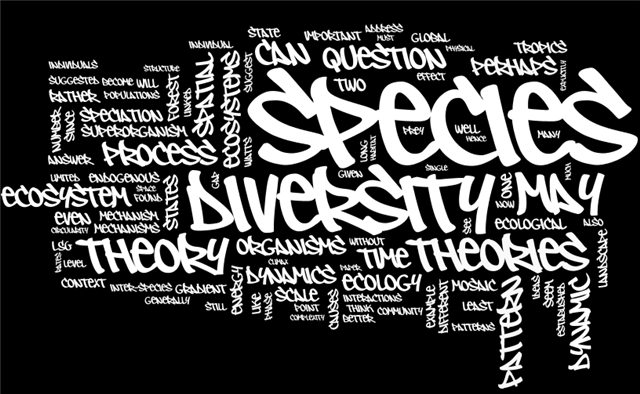 This article from the NYT on Obama’s foreign policy infrastructure has some interesting tidbits about how foreign policy theory from academics and institutes gets translated into stated policy.

“Out in the netherworld of the 300, advisers often say they are unclear about what happens to all the policy paragraphs they churn out on request. “It’s all mysterious what we send him and what gets to him,” said Michael A. McFaul, a Russia scholar at Stanford University who leads the Russia and Eurasia team for the Obama campaign.

Other team leaders include Ivo H. Daalder, a scholar at the Brookings Institution who has organized his 40-member nuclear nonproliferation team into eight working groups, and Philip H. Gordon, another scholar at the institution, who is in charge of Mr. Obama’s Europe team.”

(note that registration and full demogrpahic disclosure is required by the NYT before you can look at their website.)

Attempting to Enlist Google Earthers for My Research

I’m trying to find some additional study sites for my research. I’ve recently realized how stupid I’ve been by not using Google Earth as my main exploratory site-search tool. Way way waaay faster than trying to download overview imagery raw from USGS or wherever. It also occurred to me that there are thousands of people who cruise around in Google Earth every day, looking for interesting things and talking about it in the forums. So I posted there, in case anybody might have seen the kinds of semi-arid plant patterns I’m looking for. I’m interested to see if there will be any response.

update: the post has been moved to the “Moderated” section of the Nature and Geography forum. The above link has been updated.

A study site in Arizona.

Yesterday was the last episode of my excellent “Tools for Conservation and Behavior” seminar (I think that’s what it was called, I was never quite sure). We had Peter Bednekoff in as a guest lecturer. Peter is an editor at Behavioral Ecology and Sociobiology. He inevitably had many interesting things to say about writing for science journals, and writing in general. Some of the pithier remarks:

It’s true that reviewers can probably guess the identity of the authors of the papers they receive under the blind review system. At least to the level of what research group they work in. Mostly, he felt, from the study system. If you’re working on the dominance structure of Presbytis rubicunda, you know who you are, and everyone else in the primatology dominance world probably does too, or can at least guess what lab you’re in. However, blind review can protect grad students and other young researchers, and reduce bias against female researchers. I’d like to think that people wouldn’t pick on unestablished authors because they think they can get away with it, but all the data says there is systemic discrimination against women in the sciences.

That angle hadn’t occurred to me. I had always thought blind review was just kind of silly.

In-jokes in the acknowledgments section is okay. Oh boy.

A little pop psychology. Studies show that the best predictor of how much writing people get done isn’t whether they set long unbroken blocks of time aside, but rather how many days a week they at least make a start on it. Don’t dismiss a 1/2 hour as pointless. Also, “park on a downhill slope”. Stop when you know what you want to write next, so you’ll more willingly start again.

And finally, (actually, it was the first thing he said) Dr. Bednekoff tells us that he knows within 10 minutes of picking up a freshly submitted paper whether or not it will be accepted, although he may not be able to immediately articulate why. He says judging merit is the easy part of reviewing, nurturing the best possible result is the hard part. Interesting. Very interesting.

Empty Seats at the Pow Wow

So I got a few hours in at the pow wow. Fun, as expected. Can’t really beat it for people-watching, and everybody is doing something and having a good time. Still digesting my fry bread and (fried) buffalo burger. I got waved down to an intertribal dance by some friendly old folks in buckskin, but I pretended they were waving at somebody else. I’m shy.

A couple of weeks ago when we were having a GEO rally outside the administration building, we had to wait while a group of Indians and supporters held their own gathering to demand the return of ancestral remains which they say the university keeps in storage. At the pow wow, somebody had thought to drive this point home by roping off sections of seats. Each section had signage indicating the number of people, what county their remains had been removed from, and in what year. The number I heard (or misheard) was something like 1100 seats held empty.

University president Mary Sue Coleman gave some remarks after the opening grand procession. I wonder if she was aware.