Landcover change analysis has been an active area of research in the remote sensing community for many years. The idea is to make computational protocols and algorithms that take a couple of digital images collected by satellites or airplanes, turn them into landcover maps, layer them on top of each other, and pick out the places where the landcover type has changed. The best protocols are the most precise, the fastest, and which can chew on multiple images recorded under different conditions. One of the favourite applications of landcover change analysis has been deforestation detection. A particularly popular target for deforestation analysis is the tropical rainforests, which are being chainsawed down at rates which are almost as difficult to comprehend as it is to judge exactly how bad the effects of their removal will be on biological diversity, planetary ecosystem functioning and climate stability.

Google has now gotten itself into the environmental remote sensing game, but in a Google-esque way: massively, ubiquitously, computationally intensively, plausibly benignly, and with probable long-term financial benefits. They are now running a program to vacuum up satellite imagery and apply landcover change detection optomized for spotting deforestation, and for the time being targeted at the amazon basin. The public doesn’t currently get access to the results, but presumably that access will be rolled out once Google et al are confident in the system. I have to hand it to Google: they are technically careful, but politically aggressive. Amazon deforestation is (or should still be) a very political topic. 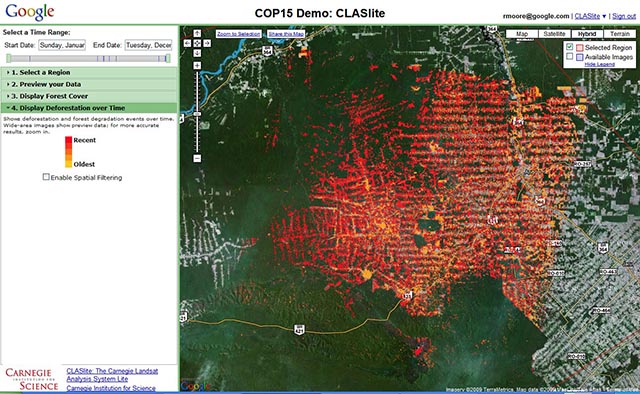 The particular landcover change algorithms they are using are apparently the direct product of Greg Asner’s group at Carnegie Institution for Science and Carlos Souza at Imazon. To signal my belief in the importance of this project I’m not going to make a joke about Dr. Asner, as would normally be required by my background in the Ustin Mafia. (AsnerLAB!)

From the Google Blog:

“We decided to find out, by working with Greg and Carlos to re-implement their software online, on top of a prototype platform we’ve built that gives them easy access to terabytes of satellite imagery and thousands of computers in our data centers.”

That’s an interesting comment in it’s own right. Landcover/landuse change analysis algorithms presumably require a reasonably general-purpose computing environment for implementation. The fact that they could be run “on top of a prototype platform … that gives them easy access to … computers in our data centers” suggests that Google has created some kind of more-or-less general purpose abstraction layer than can invoke their unprecedented computing and data resource.

They back that comment up in the bullet points:

“Ease of use and lower costs: An online platform that offers easy access to data, scientific algorithms and computation horsepower from any web browser can dramatically lower the cost and complexity for tropical nations to monitor their forests.”

Is Google signaling their development of a commerical supercomputing cloud, a la Amazon S3? Based on the further marketing-speak in the bullets that follow that claim, I woud say absolutely yes. This is a test project and a demo for that business. You heard it here first, folks.

Mongobay points out that it’s not just tropical forests that are quietly dissapearing, and Canada and some other developed countries don’t do any kind of good job in aggregating or publically mapping their own enormous deforestation. I wonder: when will Google point its detection program at British Columbia’s endlessly exanding network of just-out-of-sight-of-the-highway clearcuts? And what facts and figures will become readily accessible when it does?

Which leads me to the point in the Google-related post where I confess my nervousness around GOOG taking on yet another service — environmental change mapping — that should probably be handled by a democratically directed, publically accountable organization rather than a publically-traded for-profit corporation. And this is the point in the post where I admit that they are taking on that function first and/or well.

My Google Wave Address And Fears

I’m interested in exploring the Google Wave communication system, if anyone wants to try it I’m [email protected].

Should I not publish that address on a website? Is there Wave spam yet? If not, I’m predicting it. You heard it here first, folks.

I’m also nervous about Google owning yet another slice of our collective information infrastructure. In the case of Wave, the code is (or will be) open-sourced, and in theory anyone could make independent server software to host waves. But unike conventional email you can’t use an off-line email application as a principle place to host and store the things you’ve written to each other, so our communications are pushed yet further onto the cloud. If my wave service could be hosted on my own cloud server that inter-operated with other people’s self-hosted wave servers that wouldn’t bother me much. But I still haven’t seen movement towards personal cloud computing. And even if someone did make that happen, most people would go with a Wave service hosted and operated by a big company anyway, so that they wouldn’t have to think about it too much. And most of those people will end up with Google, because it will be the first Wave provider and, knowing Google, the best implemented.

Thus, if Waves do significantly supplant emails, the single most important messaging tool on the internet will largely be centralized with the same publically traded for-profit corporation that handles our mapping and our driving and our book searching and our public transiting and our finding of each other and our finding of everything. And it is indeed Google’s stated hope that wave will be the next email.

That said, who wants to try it out with me?

Update Dec 8th: I now have a whole bunch of invites to give out. The rate they’re arriving suggests that Wave is close to going open to normal sign-ups, but if you’re still looking for early access, and I know you somehow, I can probably hook you up.

I Want a Personal Cloud

I seem to like computing in clouds. I don’t want to: I don’t like the idea of putting my business or academic data into someone else’s for-profit servers, and I think it’s nutty in a special way to put your private photographs and social relationships in there too. But that’s just ideology, in practice I keep on opening up new documents sporting the Google logo, day-dreaming about the science computing I could do with a few hundreds dollars worth of clock cycles on an Amazon-hosted hadoop cluster, and contemplating moving my email address over to Google Apps for Your Domain. It’s all just so useful. It works across computers, it works across people, and nowadays it even sometimes works when you don’t have internet. The benefits are immediate and tangible (if cloud computing can be called tangible), and the drawbacks are longer-term and probabilistic.

Thus I was excited when the words “private cloud” started cropping up. A private cloud is web-based applications that run on your own server, instead of running on theirs. Advantages without drawbacks. For now private clouds are for corporations to run on their internal intranets. So the words I especially want to see are “personal cloud”. I already rent space on a web server, now I want to be able to install a calendaring service on hughstimson.org, in the same way I’ve already got blogging and photo gallery apps. And I especially want to install Mozilla Docs there. Mozilla, are you making Mozilla Docs?

Big question: if everybody has their own personal cloud running, can they work together? One of the major advantages of current cloud computing is collaboration. If I open a new Google Docs document here in Vancouver, my collaborators over the straight in Victoria can see it and edit it right away, using an interface they’re familiar with. If I were running a document application on hughstimson.org I could create that file, but other people probably don’t want to open an account on hughstimson.org to edit it, nor do they want to learn to use the interface for whatever editing application I’m running there.

I’m guessing there are technical solutions to this technical problem. People already care very much about standard formats in existing cloud computing, and if all of our clouds are able to speak to each other in a common language, then maybe collaboration across them isn’t such a big deal. I open a new spreadsheet, stored in .ods format on my own server, and start editing it on my web interface in my browser. Then I send out an invitation to an email address at Pink Sheep Media, and they open that document up in their own browsers using their own editing application running on the Pink Sheep Media cloud. Or maybe they’re still using Google Docs, and they access the file from hughstimson.org/docs, but edit it in the Google Docs interface. Maybe login access is handled using OpenId. Why not? The editing could be done on their servers, and then the document would be saved back to mine, staying in the open standard file format the whole time. Is that hard? Does someone know?

As far as I know, Mozilla is not working on Mozilla Docs. But they are doing some cool stuff in cloud computing. This one looks like a big opportunity to me. At least, I know I want it very much. So somebody, please, build me a personal cloud.