While visiting a friend who lives on a boat, I noticed that on her nautical charts Richmond was labelled an island. Which I suppose it is. And that furthermore that island isn’t called “Richmond”. It’s actually called Lulu Island. 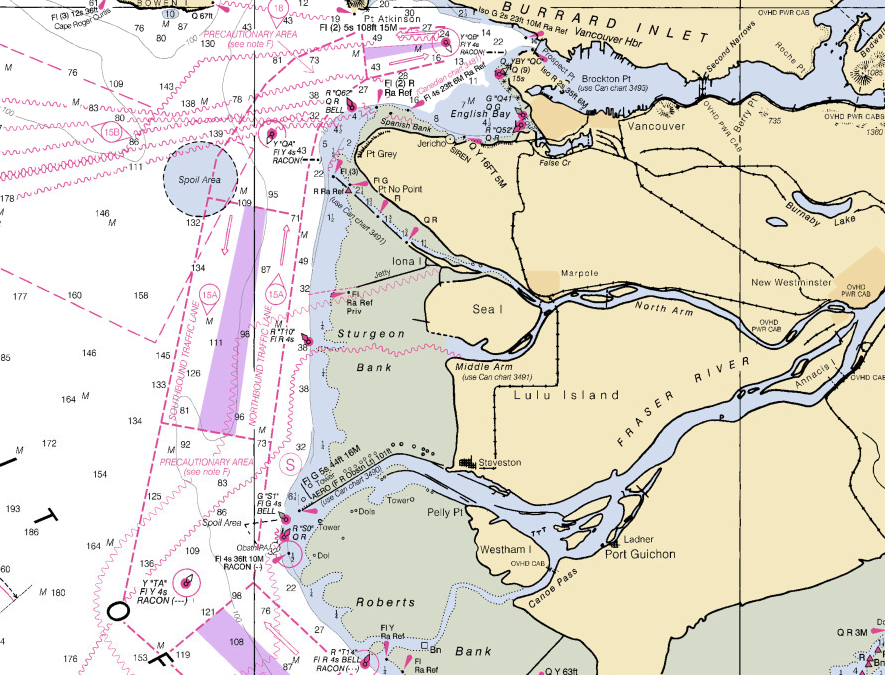 That’s a great name, but where does it come from? I checked the internet, and the consensus seems to be that Lulu Island was named in the 1860s, after a women named Lulu Sweet.

So who was Lulu Sweet? Not so clear. Here’s Wikipedia’s take:

“Lulu Island was named in 1862 for Lulu Sweet, a popular showgirl, possibly of Kanaka (Hawaiian) origin, who was dating the mayor of New Westminster when the island was named (she had bought property there).”

It’s always about real estate in Vancouver, even when it’s about showgirls. The BC Geographic Names Information System records a few similar-but-different theories about Lulu. Was she indeed a showgirl in the first troupe to visit New West?

“Named in 1862 by Colonel Moody, RE, in command of a detachment of the Royal Engineers then stationed at New Westminster, after Lulu Sweet, a young actress travelling with the first theatrical troupe that ever acted in that city. ‘Her conduct, acting and graceful manners gave great satisfaction, and were appreciated to such an extent by her friends and patrons that the island was named after her.'”

or was she actually in the employ of the Hudson’s Bay company?

“As reported in the 1897 British Columbia Year Book, Lulu was a Hawaiian or Kanaka, in the employ of the Hudson’s Bay Company. […. At times over the next years the majority of Fort Langley employees were of Hawaiian descent, but HBC archives don’t describe any incident or occasion that would warrant such a gesture.]”

Colonel Richard Moody was not, as the Wikipedia article is perhaps implying, the first mayor of New Westminster. He was a Royal Engineer and one of BC’s first Lieutenant Governors, back when that meant something. He also picked the site for New West, because he wanted to make it the province’s first official capital. (The first unofficial capital was Langley. Apparently the early British Columbians had poor taste in capitals.) According to the correspondence of his personal secretary, Moody was responsible for out-maneuvering the regional representative of the Hudson’s Bay Company. He also had a wife and 7 kids, so it would be interesting if he was spending a lot of time hanging around with a Hawaiian women in the employ of the HBC.

The Vancouver History website has some details which support the showgirl theory, pegs her at 16 years old at the time of the naming, and suggests Moody and Sweet may only have known each other in passing.

“On January 10, 1861 (a date of January 12, 1860 is also cited), during a tour of local waters, the commander of the Engineers, Col. Richard Moody, was showing Miss Sweet various features of the landscape. As they passed one island in the Fraser, she asked its name. “It has no name as yet,” Col. Moody responded, “but in tribute to you we shall call it Lulu Island.”

Unfortunately, they don’t cite their sources. Nor does this Richmond art project’s site, which carries on the water-tour narrative, and furthermore claims that Lulu was from San Francisco (not Hawaii?), revered by the newspapers for being chaste and beautiful, and that Moody was “one of her most ardent admirers”.

I happen to be a fan of the original name of North Vancouver: Moodyville. It wasn’t named after Col. Moody but we can pretend it was. Then we can resurrect the true names of both North Van and Richmond, and the ardent admirers can gaze across Vancouver at each other. 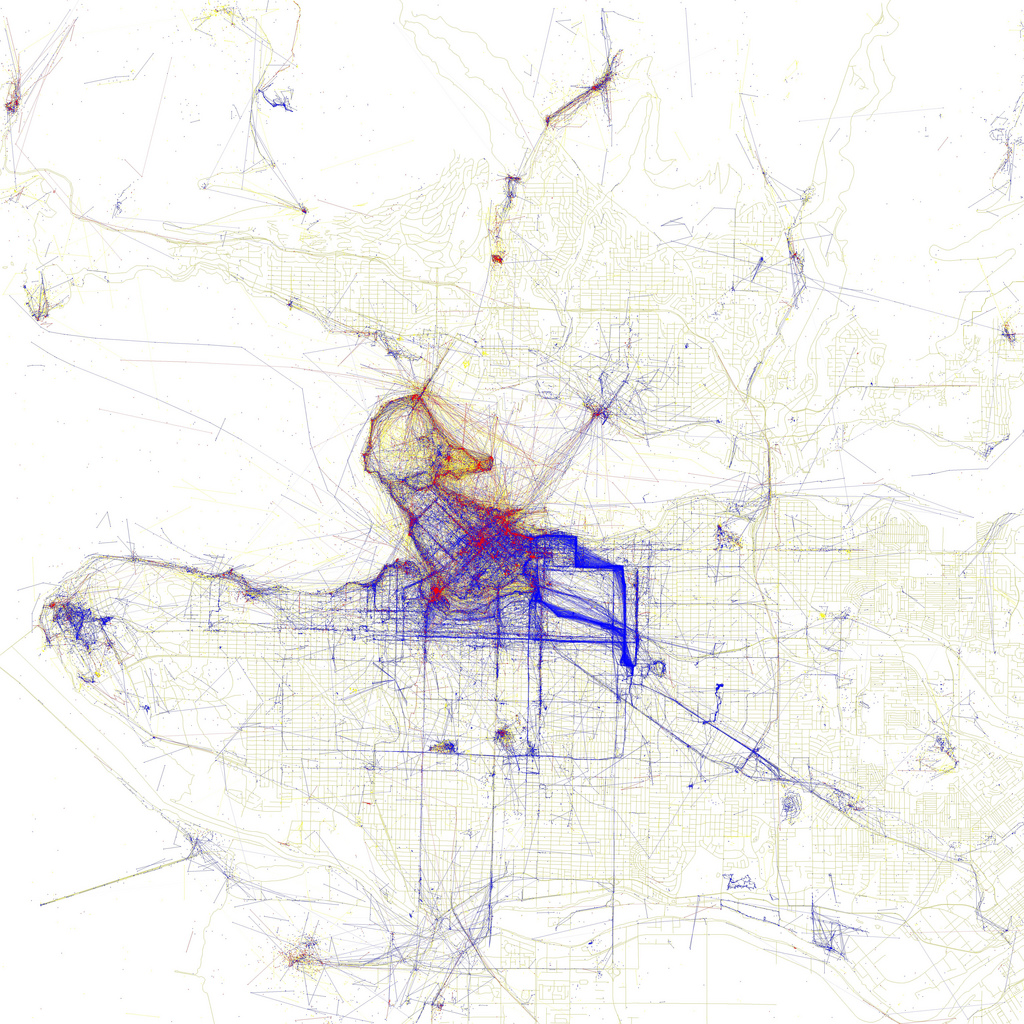 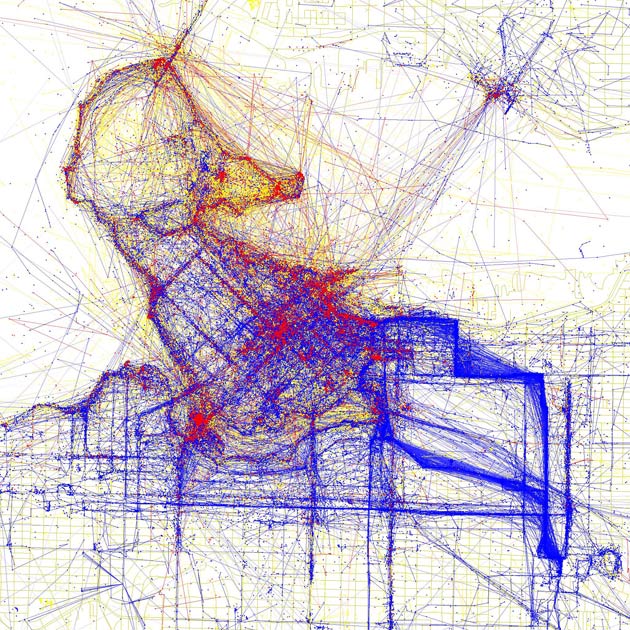 The New York Times Arrives in the Downtown Eastside

In the Shadow of the Olympics — Greg Bishop, New York Times

“By bidding for the Olympics, Vancouver invited the world to visit. Now city officials are trying to redirect the international news media spotlight from this blighted neighborhood in the shadows of the picturesque North Shore Mountains.”

This is what they were worried about, I suppose. As far as I can tell, which isn’t very far by any means, the streets are not deliberately being cleared of the homeless. I would imagine there have been a number of more-or-less subtle bylaw and policing changes to quietly draw down the level of action. But from my very surficial vantage point as an occasional passer-through, it would appear that life in the DTES is more or less unchanged here on the cusp of the opening ceremonies.

OK, WELL, half-way through writing that sentence a troupe of 10 horse-mounted police clip-clopped two by two past my window. That’s not normal.

I’m not sure what the difference between the grey-on-yellow and the yellow-on-grey checkmarks is. I guess they need to work on their metadata still.

update: it looks like each dataset in the catalogue actually is associated with a handy metadata page. For example, here’s useful info on the graffiti data, including the fact that the data is updated weekly. Although I still can’t figure out what the difference between grey and yellow boxes is in the Google Maps version above.

On the Bridge to a Cool Climate 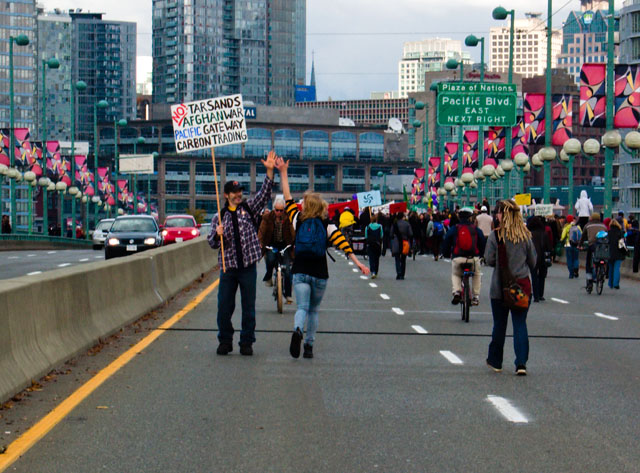