In which I scrape all my old radio playlists off the web, cook them with Python, Google Refine and PostgreSQL, and discover that I played one heck of a long tail of songs. And J.J. Cale.

A friend from the Ann Arbor years was in town for a conference, and it put me in mind of my radio days. After every show I used to post up a link to the playlist automatically generated by the WCBN server. Like this for example. I was wondering: what could be done with all that DJ Hugonaut data?

I was wondering that, and I also happen to have a lot of idle time at night while I’m on sleeping-baby-monitoring duty. So here we go.

Scraping the Webpages with Python

The first step was to actually get all that data from the web, preferably in some more data-like format than raw HTML. This task is sometimes called ‘scraping‘, which sounds kind of nasty but there you are. There may be better languages for web scraping, but since I started programming in Python I’ve been enjoying coding more than any other time in my life. So Python it is. If you like pressing the tab button, you too might enjoy programming in Python.

Python has built in capabilities for connecting to a website and getting the HTML, but navigating the raw HTML tags for useful info sounds like a terrible idea. An HTML parser was needed. I chose Beautiful Soup on the strength of it’s name. Works great.

Here’s the Python code I wrote for the web scraping job. Please don’t look at it. It was largely written while distracted and occasionally while drunk.

The script starts by connecting to hughstimson.org/projects/djhugo/ and scanning for individual podcast episodes. It extracts a bunch of data about each episode, most especially the link to the playlist on the WCBN server. It sucks down that webpage as well, and rummages through it looking for all the tracks I played that day with their times, names, artist, album, etc.

It organizes all those tracks from all the episodes into a table, and spits it into a big gob of a .csv file.

DJs at WCBN key the name of the track they’re playing into the playlist database as they play it, as well as the artist/album/label. In theory. In practice you’re busy spilling a thermos of cold coffee into turntable 1, and you rarely have time to spell Dilaudid (Marrtronix Version) precisely the same way you did last month, or look up the label that originally released A John Waters Christmas.

So the data quality from my old playlists is not exactly pristine. Enter Google Refine.

Google pitches Refine mostly towards journalists who have to deal with the crummy state of publicly released government records (here’s a compelling example of that pitch). But it’s also useful for former DJs reminiscing about the brilliant sets of their younger years.

There are a lot of power options in Refine that I don’t know how to use, but the key tool is cluster. Import a file, click on a column, create a ‘facet’, and then when that facet appears press the Cluster button. 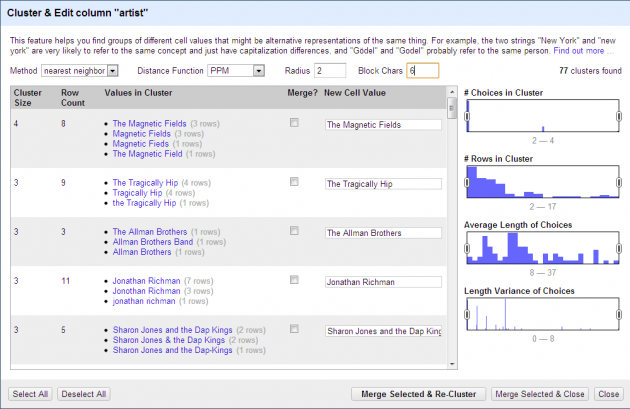 There are a number of cluster algorithms available, and as I ran them against track names, artists names and album names I found they almost all discovered a new set of duplicates. After accepting or rejecting a round of suggestions from each algorithm you can re-run the clustering on the results and see if anything new pops up.

There are a bunch of algorithms for clustering baked into Refine, and most have tweaking options available.  Almost every algorithm I ran surfaced mislabelled entries in my tracks, albums and artists, and most algorithms seemed capable of flagging a different set of mistakes. Once a cluster of entries has been suggested you can quickly pick one name to assign to the bunch of them. Press Merge Selected & Re-Cluster (a very satisfying button) and see what new suggestions emerge. If there’s nothing new, tweak your algorithm or try a new one. Deploy all algorithms. That’s life advice.

De-duplicating of table entries can also be done using the Filter option in Excel, plus a whole lot of scanning up and down the filtered list with your hurting eyeballs. But Refine’s cluster tools saves time, and catches edge cases you likely would have missed if you were depending on alphabetical proximity of sister entries. Even better, the merge & recluster process induces a strong feeling of saving time. This is especially important if you’re ignoring your actual work to play with a vanity project.

Clean data is fine, but what I wanted was summarization. Mostly I wanted to answer a question that nagged me throughout my tenure as a DJ: was I qeueing up the same 12 songs over and over? Because sometimes when it was 6:40 in the morning and the request line wasn’t flashing and I was dropping the needle on MC5’s Sister Anne yet again it sure felt like I was.

Perhaps pivot tables in Excel could have addressed this question. But since I started using PostGIS to answer geographic posers I’ve been much taken by the speed and flexibility of typing out little SQL words to do magic. PostGIS runs on PostgreSQL so up into the PostgreSQL database went the Refine output.

With the data loaded into the database, questions can be put to it. Some of those questions follow, with the specific SQL query I used to ask them, and the result.

First off, how many music shows did I do (at least that I remembered to post a playlist for)?

Sounds about right. And just how many times did I press the red ‘play’ button during those 52 shows?

That’s a lot of songs. I repeated some for sure. How many totally different tracks did I play?

Damn. Over a thousand different songs. And I promise I only occasionally pulled an album at random off the shelf.

Speaking of which, just how many albums did I draw from?

And how many different artists did I play?

Also a lot. More artists than albums in fact. Presumably that’s because I couldn’t always be bothered to enter an album name, but usually got to the artist field, which came first. And sometimes I was playing some odd bit of internet artifactery and I didn’t know what the hell to write for ‘album’ anyway.

Down to details. What were the favourites?

How I miss broadcasting J.J. Cale to the Ann Arbor and greater Ypsilanti region.

Fred Eaglesmith, Lucinda Williams, Merle Travis — I’ve forgotten how much country I played. I don’t like country I swear. Just the awesome parts. And Merle Travis I suppose.

Again with the Janelle Monae. Metropolis Suite 1: The Chase was no doubt the album I played the most from, but it only made it to the top of this particular list thanks to Refine’s ability to resolve a lot of different ways to spell the same album name while stashing vinyl in slip covers and qeueing the emergency broadcast test.

Live’r Than You’ll Ever Be made the list because the tracks on that album bleed very sweetly into each other. Thus if you need to walk out of the studio for a fire alarm or smoke break you can count on a solid hour of self-transitioning music. There’s a tip for you.

So those are the charts. What I find surprising about them is how little play those top plays got. For example: the top 10 albums collectively contributed only 6% of 1400 plays. And that includes The Essential Taj Mahal.

And let’s see that data in traditional long-tail layout.

Yes by god, that is a long tail.

Sure I had some crushes on a few tracks, but 68% of my airtime was made up of 941 tracks that I queued up once and never again. I guess I could have gotten away with a few more repeats after all. Next time: all J.J. Cale, all the time. That will be good radio.

SQL is fun (to some people), but there’s a much quicker way to analyze your data, particularly if it’s already in Google Refine.

1. Click Facet->Text Facet on the Artist column
2. Click Sort by: Count (default is sort by name) in the next text facet on left

Repeat for the track column and you’ve got your first two analyses done in four clicks with not a single SQL statement written.

This is true! Good point. But if there’s a way to get Refine to get past the first two analyses I’m not yet aware of it.

I was wondering the converse: is there a way to do some of fuzzy clustering and/or de-duping in postgres?

As someone that wants to learn to use Python to scrape sites for useful analysis, this is very inspiring.

Can I used your dataset and try to do the same analysis using google refine only. I’m pretty sure I can do the same 😉

For sure! I’m emailing you with the .csv file produced by the scraper script. If it’s possible to do the “chart” summaries using Refine I would love to know how.

SQL is great, but if Refine can handle advanced rolling up of data that would make it super convenient. Particularly for some of my journo friends who I could possibly talk into using Refine, but wouldn’t touch PostgreSQL et al with a proverbial ten foot barge pole.

Very interested to see what you can do with it.

[…] week I wrote about using Python, Google Refine and PostgreSQL to datamine my old radio playlists. That […]