These paper airplanes were judged to be too dangerous for satellites. 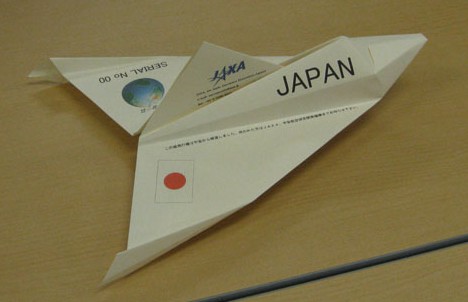 Windows on Earth is an interesting Google-Earth-like visualization program, apparently simulating the International Space Station’s view of the world in detail. A version of the project can be run through your web browser, no download.

The interface is kind of cool.

Apparently legendary video game designer Lord British is currently on the space station, and is using the program to help him take photographs of specific locations on earth, which will then be released, through the Windows on Earth program. Which all seems a bit meta. Interestingly, Lord British’s father is/was a NASA astronaut, and the photos being taken now will be for comparison with those taken by his father in the 70s and 80s, to visualize land cover change and human impact. Sounds like an interesting project.

I’ve made a Google Earth-compatible .kmz file with all the AVIRIS flightline locations from 2000 to 2006, as listed on the AVIRIS website. Google Earth is a relatively painless and speedy way to get a sense of the landscape sensed in each imagery dataset.

More information and the file itself is available on this page.

(AVIRIS is NASA’s plane-mounted hyperspectral sensor. It is entirely a coincidence that I’m posting this on NASA’s 50th birthday but hey, happy birthday NASA.)

NASA: 50 Years of Figuring Out What They Do

The National Aeronautics and Space Administration was signed into existence 50 years ago today. The Economist has a good, reasonably breif, article about the intentions and directions of the agency. Being the Economist, it’s partially speculation about potential private-industry virtues of “space exploration”. But the article is more about the division between the dreams of the manned and unmanned branches of the agency. It also mentions the earth-observing program, which I think is a third NASA branch unto itself. The article suggests the unmanned probe makers may tolerate the manned exploration romantics just as cover and funding-bait. And possibly vice a versa. Maybe the earth-observers can likewise use both the manned and the unmanned missions as an infrastructure to exploit. Either dream is closer to the original mandate of the massive NASA bureaucracy than building satellites to measure the environment, which could be a hard sell on it’s own. Or maybe, nowadays, astronauts and probes both just draw away money and steam it off into space.

Many happy returns? — The Economist

Also see A Rocket to Nowhere, from a few years back.

Walking On the Moon

There’s something compelling about this map of the walking paths of the Apollo 11 astronauts on moon, superimposed on a baseball diamond for scale.

Like, they were really there walking around on the holy crap moon.

A bit. They didn’t go very far. If I was on a brand new world I wouldn’t go far from the car either.

Graffiti for the Skys

I’ve been working my way through the back-catalog of AVIRIS imagery, looking for a study site. I was kinda suprised when I saw this:

I guess somebody noticed all those planes and decided to give NASA something to look at.

Full sized image (a black&white preview of the actual data set), is here.

A New Hope for NASA’s Soul

Recently my extended family was chatting about “nasty corporate entities you have worked for”. I have quite a list. Logging companies, oil companies, militaries. It ain’t pretty. My mom pitched out NASA as one of mine.

Now I don’t quite agree with that. It’s far too true that the vast majority of NASA’s resources are committed to cube-esque self-perpetuating boondoggles on the one hand, and boyish triumphalist pre-obselete politicized megafollies on the other. And that’s bad. Some people are advocating a new apollo program to save our planet from epic climatic perturbation, and instead what we have is a more literal apollo program to stand around on Mars a bit. Kind of a waste of our treasure, and a bit off the point as a new spiritual uniter of our civilization. Yes, OK. But.

NASA also does some of the best work on the planet on gathering data about the planet. Planetary and regional and landscape-scale data that is sine quo non for understanding and responding to planetary and regional and landscape-scale problems, which increasingly exist. The fact that we can think globally and quantitatively at the same time, at all, is largely thanks to the boffins and administrators at the National Aeronautics and Space Administration and their fancy ballcaps.

The biggest and best and most mature of NASA’s earth-observing programs is the Landsat series of satellites and their accompanying infrastructure and data processing and distribution programs. Anybody who works in satellite monitoring of the earth’s functions has used Landsat data, and probably mostly Landsat data. Around the time that NASA announced it’s Bush-mandated refocus on putting people on Mars, they also quietly announced that the ailing Landsat program was going to be left to die in space, dieing as the satellites died one by one.

Well, as of this month, they’ve backed off that position. They are once again going to allocate some small fraction of their budget into useful programs. According to this report, a resolve exists to make the “moderate-resolution imaging” program a permanent and stable thing. This is good news. So yay NASA! And yay me for taking their money (sort of, occasionally)! And yay Landsat! May you ride the horizon a few decades longer.

Half a billion dollars may sound like a hell of a lot of cash to spend on yet another mindless thrill-fest, but hey, we’re getting set to blow that out of the water.

NASA has announced some new plans.

NASA says it will set up polar moon camp

I used to be indifferent about NASA’s space exploration operations until I read this blog editorial:

A Rocket To Nowhere

Now I’m less indifferent and more distressed. That’s a enormous amount of money into what sounds compellingly like a big cube-esque boondoggle.

(Incidentally, I’m assuming that Cube is a retelling of an older philisophical or literary meme, in a similar way to the Matrix and the Parable of the Cave. Can anyone tell me what that meme would be?)

For what it’s worth, my previous lukewarm support of the space exploration program was on the grounds that it really is an exciting prospect, and there didn’t seem to be any convincing reason to think that if the funding were pulled that it would be transferred into anything worthwhile. Since then however, events have strongly suggested that expansion in the space exploration department comes together with reduction in the earth environmental monitoring department. Which I maintain is wildly important, more so than I think it gets credit for.

However exciting, I don’t think space exploration is at all practical. No matter how smart MC Hawking may be, any earth worth leaving is unlikely to be able to support the evacuation of any but a tiny elite of humans. Frankly, I think the world, the universe, myself, and anyone statistically likely to be descended from me are all almost completely unlikely to benefit in any material way from space exploration. It’s nice and all, but not for the cost, and particularly not if it affects the budget of NASA’s useful projects.

NASA JPL have a series of internships available this summer. Amongst them: