I Refuse to Blog Under A Conservative Majority

Computer Dollhouses and the Vagaries of Internet Fame

When I visited Chiron Bramberger a few weeks back he showed me some photos he had taken of dollhouse furniture staged in a computer case. I thought they were really neat. A couple of days ago I saw similar photos posted by Cory Doctorow on his blog BoingBoing, which has the reputation of being the most-visited blog in the universe. I shouted “hey!”, then read the post which attributed the photos to a Russian casemodder. Such is the power of contextualization that I instantly accepted that the photos on BoingBoing were only coincidentally similar to Chiron’s, and forgot about it. 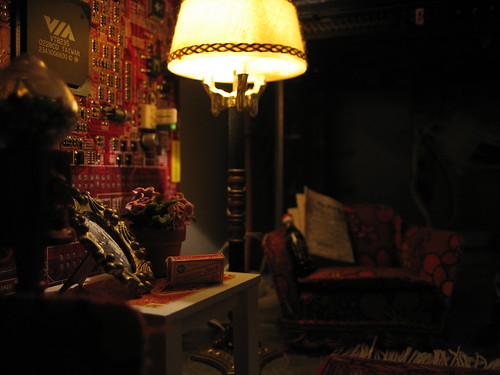 So Chiron’s little photo project seems to have a attained the maximum of internet fame that such art projects can. Held up for admiring inspection by thousands, perhaps millions of internet readers who frequent the very creme-de-la-creme of blogging sites. Which is a great thing in it’s own right: to have your idea enjoyed by many. That’s cool. But I think I’ve always assumed that when I see somebody’s project do the rounds on the cool-things blogs, it must represent some moment of personal success for the originator. Recognition and credibility and an increase in the world’s demands and attentions on that person. Perhaps sometimes it does. In this case Chiron apparently didn’t even know it was happening until after the fact. Chiron does have projects that merit attention; some are non-commercial, like the Broken Happiness Machines and Petsynth projects which have formed the bulk of the content on hughstimson.org lately, and also Flytrap Gear, which is commercial at least in the sense that it would be most successful conceptually if lots of people bought stuff. Did any of the dollhouse-mod traffic accrue to Petsynth or Flytrap? I’m guessing no, since there were no links even to Chiron’s sites.

This isn’t a complaint, I’m not implying that the blogs which featured the dollhouse photos did anything wrong in doing so, or were obliged to do the kind of deep research which might or might not have tracked the photos back from the Russian site to Chiron, and I’m not disrespecting the basic fun of having Chi’s photos traded around by admiring folks worldwide. But the disconnect is interesting.

It’s also mirrored somewhat by Morris Rosenthal’s experiences. He wrote a book about computer diagnosis and repair, and also prepared a series of excellent diagnostic flowcharts, which he posted on his website in 2003 hoping they might “go viral” and show up on CS students’ dorm walls and blogger blogs. He reports that over the years those flowcharts have indeed had some success on the internets, but didn’t blow up as a “discovery” of great novelty and nowness until suddenly this year (landing them for instance on BoingBoing). Apparently this sudden virality isn’t related to any change in the way he posts or publicizes the flowcharts, it’s just a random fluctuation in interest which was amplified through the law of increasing returns governing the link-blog universe into a random frenzy. A butterfly tweets in Tokyo Harbour and there is a storm over the Metafilter Coast. Morris also suggests that that wave of nonlinear virality helped book sales, but only a little. Perhaps that is due in part to bloggers’ tendency to link an item to the blog they discovered it on with the ubiquotous [via] tag, rather than to the item’s original source.

Incidentally, it’s been my policy on hughstimson.org to link to the original source of an item if possible, although I’ve often had a twinge of guilt in doing so. I worry that it might appear that I’m claiming original research, when I’m actually riding the same wave of aggregate fascination that powers everyone else’s blogging.

Another disconnect: even though tens of thousands of people did in the end find the primary website for the book from which the flowcharts were derived, the difference in actual book sales was on the order of 1%. Mr. Rosenthal says

“Most marketing consultants and promotional experts aren’t focused on bottom line sales because they can’t deliver them. They’ll expect you to celebrate the number of websites quoting your story, the number of visitors to your site, the number of links that show up on unrelated sites around the world.”

That kind of uncommericalizable commerciality makes me think of the current Twitter fascination. Every business entity in the world wants Twitter cred. And somehow this social networking addendum, best suited in form to trivial narcissism, has become a business obligation. Employees are obliged to twitter whether they want to or not. Why? Retweets and followers are not minted on the gold standard. You can’t turn them in to Bank of Twitter for an equivalent weight in gold shavings. The occasional stories about commerical returns (think “Dell Sells Computers on Twitter“) only seem to point up the ridiculousness of the possibility of making real money through one-liners. But businesses want profile, seemingly for its own sake. The connection between online success and integrated meat-world success has always struck me as a non-simple one, and the experiences of folks like Chiron and Morris Rosenthal seems to suggest it may be very non-linear indeed.

Jesse Brown, former host of the former radio show “Search Engine” remains on the edge of employment at the CBC, allowed out of his blog just occasionally to file a 3 minute segment on Sunday Edition, as long as it’s sufficiently watered down and regards little of import. I guess we should all be thankful that the tax-engorged technocrats at the CEEB see fit to let little Jesse host his “website” on the corporate servers at all.

But apparently they’re going to use him on election night. He reports, in his latest podcast, that tomorrow eve he’ll be tasked with tracking national response to the results as it appears on the internets: blogs, twitter, so on. Does that mean he’s going to be on TV? I don’t know, the Search Engine site is slim on details. Or anything else. He freely admits that he doesn’t know what he’s really going to do. And let’s face it, reporting on the election when it is by definition over, isn’t that great of a gig. Although I suppose his company will be all the big name anchors engaged in the same redundancy.

It’s remarkable that a radio show which only really existed for a few months and has been off the air for almost as long as it was on still manages to rank as the 7th result for a Google search of the fairly popular term “search engine”.

It’s also remarkable that a straight-ahead internet-affairs radio show/weekly podcast makes me laugh out loud more than just about any media I come in contact with. Jesse never winks.

I wonder if today was the most BoingBoing-dense day ever? Possibly not.

Fafblog is back. It’s been two years.

Bid Dead Place is a Book

Big Dead Place is a book!

Now I wish there was going to be a gift exchange thing this year, so I could ask for this for christmas. Who has a used copy they want to sell me?

I guess I must be spending a lot of time at my desk. I notice that October has been my bloggingest month since the war started. Although I do a lot more short and/or link posts now than in days of yore. For example.

Sorry about the title. Kieran Healy links and juxtaposes some Marxist and Smithist economic theory regarding specialization in the context of a set of photographs of Chinese toy factory workers. Its a good trick and one that I, not being an economist, don’t see don’t very often.

At Crooked Timber, Ingrid Robeyns has a teaser-post up announcing that she will write a longer post about the political crisis in Belgium. She mentions that most non-Belgians (or perhaps, most non-Flemish) have trouble understanding why language should be such a big deal. Canada is dutifully mentioned in the ensuing comments, and commenter Alison adds this summary of our national skills in consistency:

Document, services and signs tend to be in the languages mandated by the level of government responsible for them. The airport in Toronto is signed bilingually because of its federal connection. The calendar for municipal garbage pickup is available in many, many languages, because Torontonians speak hundreds of them, and the government wants people to put out the right sort on the right day. Provincial laws are bilingual in Ontario, but most public servants are not. The courts have the capacity to operate in French, but it is infrequent except where there is a high density of Francophones.

Clear? Our weather is in Celsius and our ovens are in Fahrenheit. Our buildings are in imperial and our roads are in metric. Our cheese is advertised in pounds, but the shelf signs are normalized for comparison in grams.

We are bilingual and multicultural. Aboriginal people belong to First Nations, but are not included in the Constitution as a founding people, like the British and French. Quebecers tend to ignore the rest of us, but most of our prime ministers (and all of the best ones) have been from Quebec.

There will be a quiz later.

I’m a hardened boingboing.net addict. Sometimes I don’t even like visiting boingboing. It’s kind of like those people who live in lower mainland BC but are pissed off at the breathtaking scenery cause, like, what am I supposed to do about that?

Boingboing has just had a total site redesign. Ironically (?) I learned about the redesign from waxy.org‘s RSS feed. It’s nice. I like it, although lots of people don’t seem to. Maybe the biggest deal is the return of comments. The boingboing gang of 4’s justification for turning comments off a few years ago was that they couldn’t effectively moderate them. So now they’ve hired somebody to do it. Who do you hire to moderate your comments if you are the most-visited blog on the internet, with a monthly readership approximately equal to Wired magazine’s and total monthly expenses of a few thousand in hosting fees? Teresa Nielsen Hayden apparently. Which is kind of like starting a new church and hiring god to play the organ. I imagine she’ll do well.