Half A Chance At A Centre-Left Coalition

It’s a ridiculous time for speculation, given that the one poll that really matters is actively underway, but I’m going to speculate anyway. I’ve got four ifs and a hopeful then.

I’d assign about 2/3rds likelihood to the #1 if. The best two polling aggregation and modelling sites are both projecting 143 seats for the Cons, 12 short of a clear majority. Polling and modelling sometimes gets it wrong, but not usually very wrong right before an election. Especially if multiple models are coalescing on the same projection.

#2 if is probably 2/3rds likely as well. Even the more cautious threehundredandeight.com is projecting the NDPs in a strong second place. Given that the numbers were getting higher right up until the last poll left the field, that could mean that the final results could look even better.

#4 is probably 3/4s likely. The Liberals made a choice to underwrite Harper’s very effective framing of coalitions as back-room deals to elect second place leaders. They probably had to. But the NDP never bought that message, and they’re better placed to lead the charge on re-framing. And if they do form a relatively stable two-party sans-Bloc coalition, it would likely give them a full four years to prove to the suspicious Anglo masses that coalitions are a boring, practical arrangement.

I’m not sure how to boil those probabilities into a single mathematical likelihood, because they’re all correlated with each other. But generally I’d say we’ve got a one out of two chance of a wonderful outcome here.

The alternative could be terrible. Who says Canadian politics are boring? OK, nobody lately.

Also worth noting: the first major act of a re-elected Conservative party is presumably to re-introduce the same budget that partially triggered the last dissolution. If a coalition is to be formed, that will be an obvious moment for it. If it happens, it could happen in a matter of weeks. Another wildcard: even if a coalition meant a second-place Liberal party very publically going back on their word and allying themselves with the nasty Bloc, they might still go for it. I’m not sure it would be stable or play well in the inevitable next election, but it would be hard to resist.

This guy appears to be doing some work on network-based artificial intelligence… in flash. I wouldn’t have thought flash would be a first choice of programming language if you’re into experimental computation. But you gotta admit, it sure does look pretty. 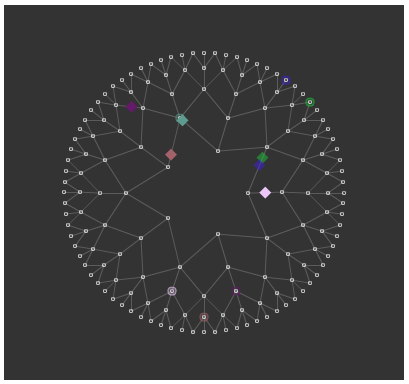 Maybe Netlogo should hire a designer to gussy up their applets. Right after they get around to going open source.

Stephen Wolfram Building A Search Engine That Models the World?

How? If the descriptions of the engine I’ve read are accurate, and they can’t be, it essentially runs a model of the world, constructed of all the theoretical constructs which Wolfram an co. have been able to represent in some kind of Mathematica-based ur-language and a massive pile of curated raw data on everything. So I suppose if you ask it “how long would it take for me to fall from 30 000 feet”, it determines semantically that you are asking a question about gravitic physics, calculates distances, speeds, resistances, and masses, and tells you a number. And if you ask it, “will it hurt?”, it fires up it’s nueron-emergent model of the brain and says, “yes”.

Or something. I don’t know. Look, it’s possible Wolfram really is a genius and not just a strong technician, and consequently could be building a revolutionary engine which commensurates knowledge from diverse conceptual domains into a meaningfully live intelligence grower. I’m certainly curious to find out.

Yesterday there was 2 hour webcast demoing the engine. I’m not curious enough to watch it. But they’re promising it will go public in May. What questions do you have?

GIS and Agent-Based Modelling Blog Blogs About My Generations Model

I’m tickled to see that Andrew Crooks at the GIS and Agent-Based Modelling Blog wrote up a little post about my “Generations” extension of the classic Shellings segregation model. I only wish I had a NetLogo version, or something runnable that people could play with. Not that it’s a ground-breaking model, but I thought it was a fun little experiment. Unfortunately, it’s hard to share around Repast java code, or rather it’s easy to share the code but hard to get it running on a new system. I don’t think I even know how to get that model running on my own computer now, shy of installing Eclipse and teaching myself to use it to link libraries again.

Eric Russell’s GIS extension for NetLogo has been released as a 1.0 version. Eric has licensed it as fully open source, in the hopes that it will be developed further by the community, which is great. It will come bundled with the 4.0.3 version of NetLogo, which is due out shortly (and will not be open source at all. When CCL? When?).

It’s too bad the upcoming Language as a Complex Adaptive System conference won’t have a poster session, or I’d use the GIS extension to roll some realistically spatial population-distribution data into my accent formation model and see if it generated any interesting results to poster up.

Woke up to find this elegant little conceptualization in my inbox. It’s from Jim Lyons, who is one of the alpha boffins on the ridiculously helpful netlogo-users discussion group. While I was preparing my hangover, apparently Jim was preparing something for me to peer at through it.

(I stuck an online version here if you want to see it go. I recommend slowing it down a little.)

Each turtle moves towards the centroid of the others, accelerating at a
rate inversely proportional to its distance from that point — except
when the distance is below a certain small threshhold, it just coasts.

As you watch the turtles wander erratically, remember that the code
they are executing is entirely deterministic — randomness is used only
to set their starting positions. Even so, very slight differences at
the beginning produce very different outcomes, the defining
characteristic of chaotic systems.

It is really quite entertaining, and is fun with more than 3 turtles,
too. (It even works with only two turtles.)

Paste this code into the Procedures of a new NetLogo 4 model. In the
Interface, make setup and go buttons and set View Updates to On Ticks.
Enjoy!

Eric Russell has released an early-development version of an extension for using GIS data in the NetLogo agent-based modeling environment. This is fairly large good news to a fairly small group of people. I’m one of them.

In addition to bringing raster-based data into NetLogo models (such as using USGS elevation data in this Grand Canyon model that Eric previously contributed to) the extension allows for import of vector data in the form of shapefiles. The shapefile format is openly-documented, but that still can’t have been easy to build. Assuming it works, doing so should substantially lower the barrier to integrating truly interesting real-world data into agent-based models, especially for people who don’t want to dedicate the bulk of their effort to that task.

I haven’t tried it yet, so I can’t speak to stability. Installation looks to be pretty easy though. It’s very possible this will come in very handy with my pending research.

Back during the winter break, I read Stephen Levy’s 1984 book Hackers – Heroes of the Computer Revolution. It expounds ad nauseam on the “hacker ethic“, which among other things means free sharing of tools for making tools.

Also over the break I was starting my agent-based model of Bornean fruiting synchrony. I’m making it with the NetLogo agent-based modeling environment. While programming the model I found I really wanted to be able to visualize NetLogo’s random number generators, and their parameterizations.

So I made a random number distribution visualization tool. And in the spirit of the Hacker Ethic, I prettied it up and put it on the website in case anyone else wanted one. I posted to the NetLogo user’s group, but I forgot to mention it here.

So if you’ve been looking for a visually-oriented way of understanding the randomization tools in NetLogo, hey, there it is!